Along with the town, the first thing your player sees will be your user interface. We've chugged along with a reasonably decent one for a while, but not a great one. Ideally, a user interface should make the game approachable to new players - while still offering enough depth for returning ones. It should support keyboard and mouse input (I know many long-time roguelike players hate the mouse; but many newer ones love it), and offer feedback as to what the symbol soup actually means. Symbols are a great way to represent the world, but there is a learning curve while your brain comes to associate g with a goblin and imagines the scary little blighter.

Cogmind is an inspiration for ASCII (and simple tile) user interfaces. If you haven't played it, I wholeheartedly recommend giving it a look. Also, in a conversation with the creator of Red Blob Games, he gave some very insightful commentary on the importance of a good UI: building a UI up-front helps you realize if you can show the player what you are making, and can give a really good "feel" for what you are building. So once you are passed initial prototyping, building a user interface can act as a guide for the rest. He's a very wise man, so we'll take his advice!

I like to sketch out UI in Rex Paint. Here's what I first came up with for the tutorial game: 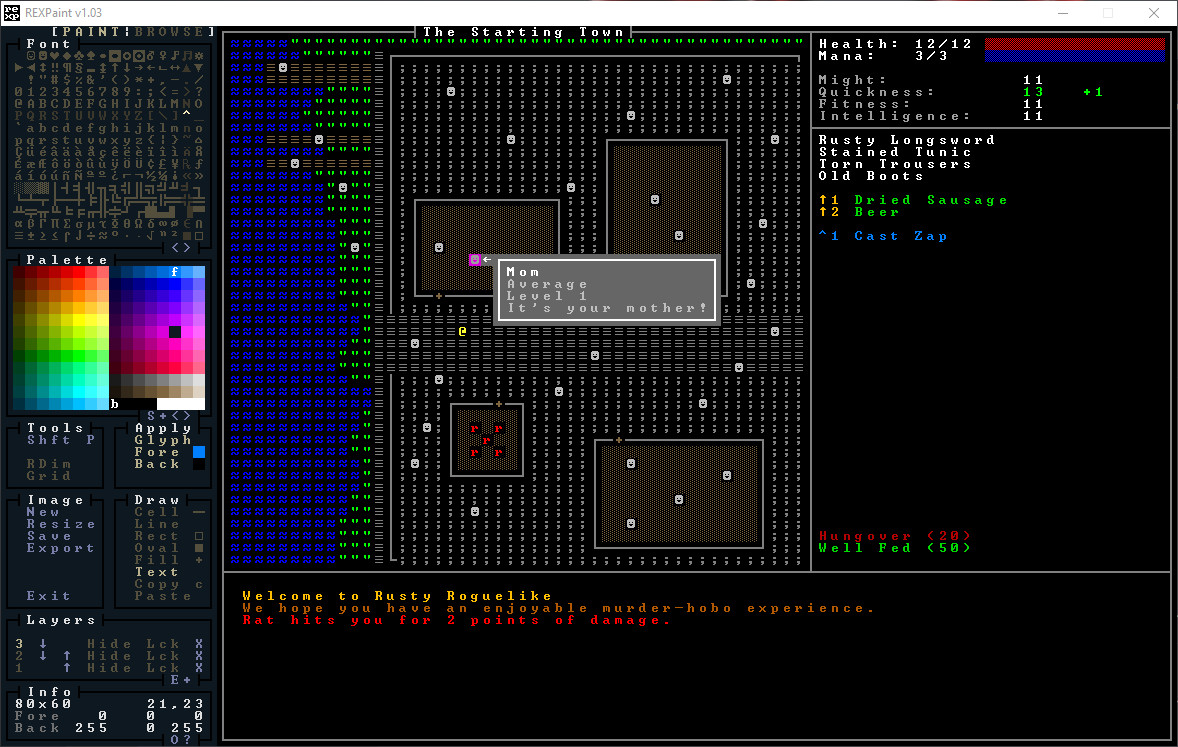 This isn't a bad start, as far as ASCII user interfaces go. Some pertinent notes:

In main.rs, the first thing our main function does is to bootstrap RLTK. We specify resolution and window title here. So we'll update it to match what we want:

If you cargo run now, you'll see a bigger console - and nothing making use of the extra space! 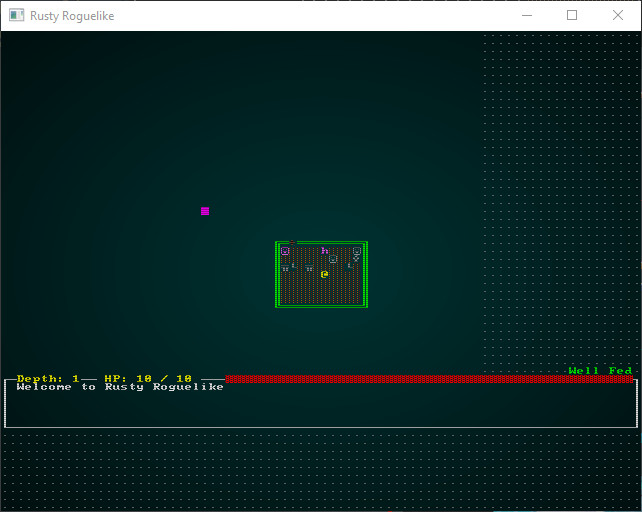 The prototype has the map starting at 1,1 and running to 48,44. So open up camera.rs, and we'll change the boundaries. Instead of using the screen bounds, we'll use our desired viewport:

Instead of reading the screen size and scaling to it, we're constraining the map to the desired viewport. We've kept the ctx parameter even though we aren't using it, so as to not break all the other places that use it. 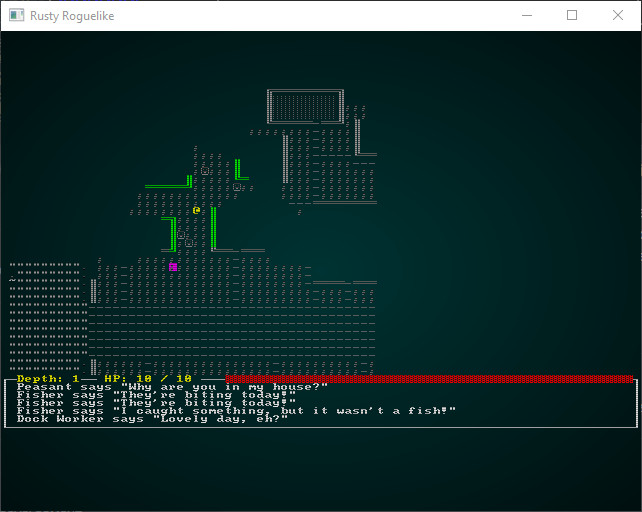 We'll go into gui.rs (specifically draw_ui) and start to place the basic boxes that make up the user interface. We'll also comment out the parts we aren't using yet. The RLTK box function works well, but it fills in the box. That's not what we need here, so at the top of gui.rs I added a new function:

This is actually copied from RLTK, but with the fill removed.

Next, we begin work on draw_ui:

This gives us a cropped map, and the basic box outline from the prototype graphic: 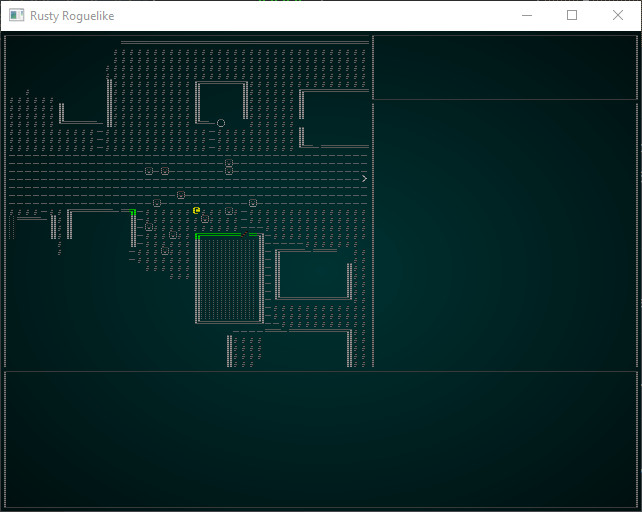 Now we add some box connectors in, making it look smoother:

It looks really nice to show the map name at the top - but maps don't current have a name! Let's rectify that. Open up map/mod.rs and modify the Map structure:

Finally, in map_builders/town.rs change the constructor to name our town. I suggest you pick a name that isn't my company!

Whew! After all that, let's draw the map name in gui.rs:

So we fetch the map from the ECS World, calculate the name's length (plus two for the wrapping characters). Then we figure out the centered position (over the map pane; so 22, half the pane width, minus half the length of the name). Then we draw the endcaps and the name. You can cargo run to see the improvement: 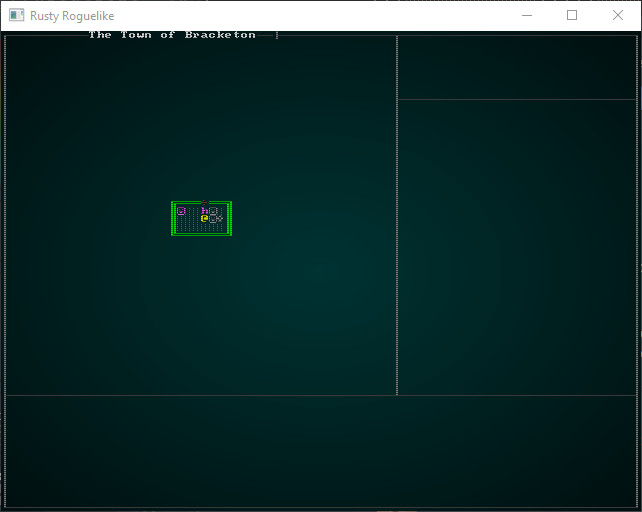 We can modify the existing code for health and mana. The following will work:

Underneath, we want to display the attributes. Since we're formatting each of them the same, lets introduce a function:

So this attribute prints the name at 50,y in a lighter grey. Then we determine color based on modifiers; if there are non, we use white. If they are bad (negative) we use red. If they are good (positive) we use green. So that lets us print the value + modifiers (total) at 67,y. We'll print the bonus at 73,y. If the bonus is positive, we'll add a + symbol.

Now we can call it from our draw_ui function: 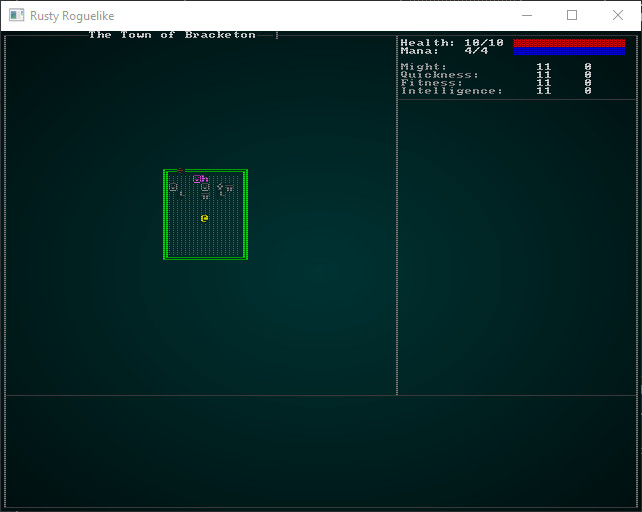 A nice feature of the prototype UI is that it shows what equipment we have equipped. That's actually quite easy, so let's do it! We iterate Equipped items and if they owner equals the player, we display their Name:

This is also easy:

We add 1 to y, to force it down a line. Then set index to 1 (not zero, because we're aiming for keys across the keyboard!). Then we join backpack, consumables and name. For each item, we check that owner is the player, and index is still less than 10. If it is, we print the name in the format ↑1 Dried Sausage - where 1 is the index. Add one to to the index, increment y and we're good to go.

cargo run now, and you'll see we are definitely getting closer: 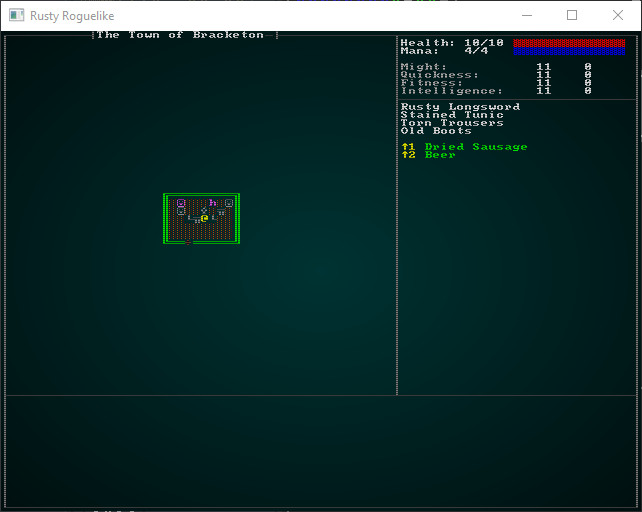 We'll gloss over this a little because we currently only have one. This is a direct port of the previous code, so no need for too much explanation:

Again, this is pretty much a direct copy:

Again, making it nicely colored is a future topic.

We'll restore the call to draw the tooltips:

Inside draw_tooltips, we first have to compensate for the map now being offset from the screen. We simply add 1 to mouse_map_pos:

That gets our old tooltip system working - but the prototype shows a spiffy new display! So we need to create a way to make these pretty tooltips, and arrange them. Since tooltips can be thought of as a self-contained entity, we'll make an object to define them:

The idea here is to think about what constitutes a tool-tip:

So now we actually need to use some tool-tips. We'll largely replace the draw_tooltips function. We'll start by obtaining access to the various parts of the ECS we need:

This isn't anything we haven't done before, so no need for much explanation. You are just asking the ECS for read_storage to component stores, and using fetch to obtain the map. Next, we query the mouse position in the console, and translate it to a position on the map:

Notice how we're calling return if the mouse cursor is outside of the map. We're also adding min_x and min_y to find the on-screen position in map space, and subtracting one to account for the map's border. mouse_map_pos now contains the mouse cursor location on the map. Next, we look to see what's here and if it needs a tool-tip:

So we're making a new vector, tip_boxes. This will contain any tooltips we decide that we need. Then we use Specs' join function to search for entities that have ALL of a name, a position and do not have a hidden component (that's what the exclamation mark does). The left-hand side list is the variables that will hold the components for each matching entity; the right-hand side are the entity stores we are searching. Then we check to see if the entity's Position component has the same location as the mouse_map_pos structure we created.

Now that we've decided that the entity is on the tile we are examining, we start building the tooltip contents:

This creates a new tooltip object, and adds the entity's name as the first line.

We also check to see if the entity has a Pools component, and if they do - we add their level to the tooltip. Finally, we add the tooltip to the tip_boxes vector and close out of the loop:

If there are no tooltips, then we may as well exit the function now:

So if we've made it this far, there are tooltips! We'll use code similar to what we had before to determine whether to place the tip to the left or right of the target (whichever side has more room):

This is just the sum of the height() function of all the tips. Now we shunt all the boxes upwards to center the stack:

Finally, we actually draw the boxes:

If you cargo run now and mouse over a character, you'll see something like this: 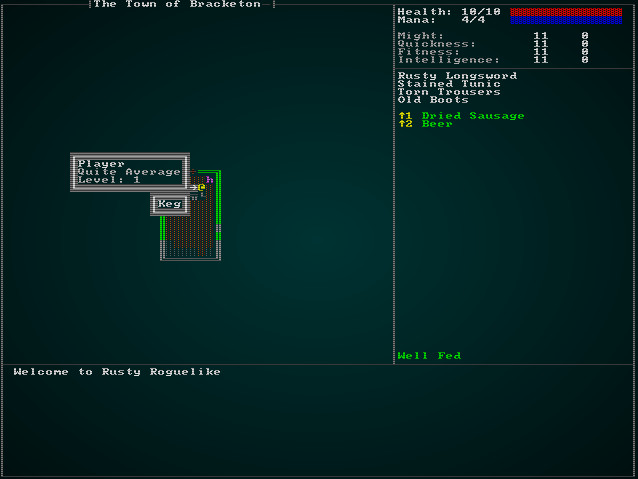 Since we added a spiffy new way to use consumables from the UI, we should make them do something! We handle all our player input in player.rs, so lets go there - and look at the appropriately named player_input function. We'll add a section at the beginning to see if shift is held down (that's what the up arrow generally indicates), and call a new function if shift and a number key are down:

This should be pretty easy to understand: if shift is pressed and a key is down (so ctx.key.is_some() returns true), then we match on the number keycodes and set key to the matching number (or leave it as None if some other key is called). After that, if there is Some key pressed, we call use_consumable_hotkey; if it returns true, we return the new run-state RunState::PlayerTurn to indicate that we did something. Otherwise, we let input run as normal. That leaves writing the new function, use_consumable_hotkey:

Let's step through this:

The rest will happen automatically: we've already written handlers for WantsToUseItem, this just provides another way to indicate what the player wants to do.

So now we have a nice, easy way for the player to quickly use items!

In this chapter, we've built a pretty nice GUI. It's not as slick as it could be, yet - we'll be adding to it in the coming chapter, but it provides a good base to work from. This chapter has illustrated a good process for building a GUI: draw a prototype, and then gradually implement it.