So far, we've delved into the dungeon and really only improved ourselves by finding better gear. Swords, shields and armor with better stats - giving us a chance to survive stronger enemies. That's good, but only half of the equation typically found in roguelikes and RPGs; defeating enemies typically grants experience points - and those can be used to better your character.

The type of game we are making implies some guidelines:

When you defeat something, you should gain XP. We'll go with a simple progression for now: you earn 100 XP * enemy level each time you defeat something. This gives a bigger benefit to killing something tough - and a smaller (relative) benefit to hunting things down once you have out-levelled them. Additionally, we'll decide that you need 1,000 XP * Current Level to advance to the next one.

We already have level and xp in our Pools component (you'd almost think that we were planning this chapter!). Let's start by modifying our GUI to display level progression. Open up gui.rs, and we'll add the following to draw_ui: 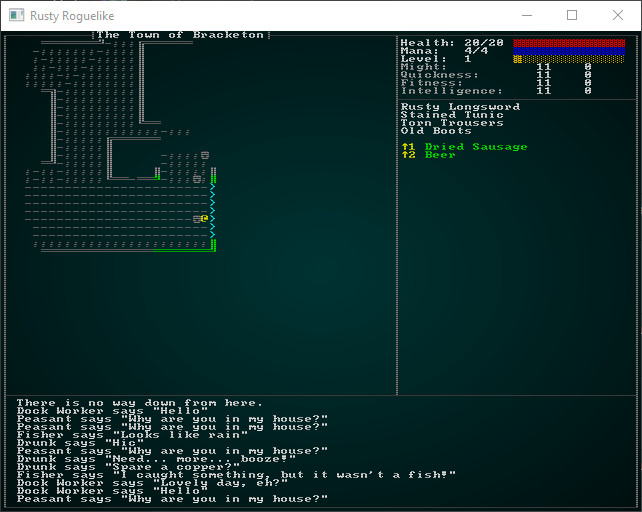 Now we should support actually gaining experience. We should start by tracking where damage came from. Open up components.rs, and we'll add a field to SufferDamage:

We've added from_player. If the damage originated from the player - then we'll mark it as such. We don't really care about other entities gaining levels, so this is enough differentiation for now. A few places will now give compiler errors when they make SufferDamage components; in most cases you can add from_player: false to the creation to fix them. This is true for hunger_system.rs, trigger_system.rs. inventory_system.rs needs to use from_player : true - since right now only players can use items. melee_combat_system.rs needs a little more work to ensure you don't gain XP from other creatures killing one another (thanks, wolves!).

First, we need to add the player entity to the list of resource to which the system requests access:

Then we make the from_player conditional upon the attacking entity matching the player (all the way down on line 105):

So that takes care of knowing where damage came from. We can now modify damage_system.rs to actually grant XP. Here's the updated system:

So as we process damage, if it is from the player and slays the target - we add to the variable xp_gain. After we're done with the slaying, we check to see if xp_gain is non-zero; if it is, we obtain information about the player and grant them the XP. If they level up, we recalculate their hit points and mana.

You can cargo run now, and if you slay 10 beasties you will become level 2! 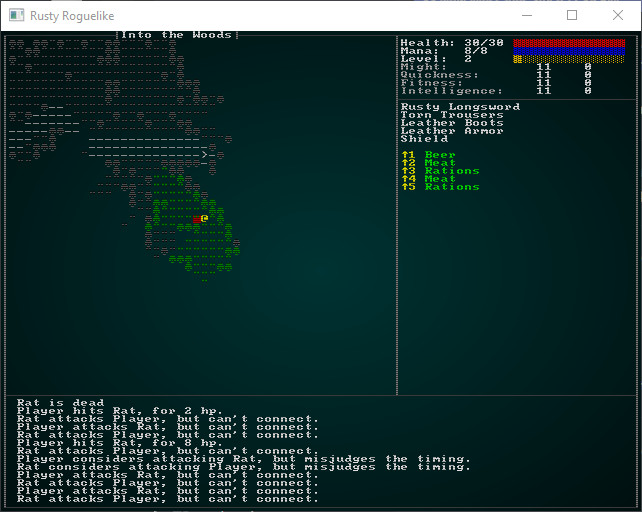 It's a big deal - you levelled up, healed yourself and are ready to face the world on a whole new stratum! We should make it look like a big deal! The first thing we should do is announce the level up on the game log. In our previous level-up code, we can add:

Now at least we're telling the player, rather than just hoping they notice. That's still not much of a victory lap, so lets add some particle effects!

And we'll add a stream of gold above the player!

We're not really using skills right now, other than giving the player a +1 to a lot of things. So until we start using them, we'll leave this blank.

So now you can go up levels! Huzzah!