This tutorial is primarily about learning to make roguelikes (and by extension other games), but it should also help you get used to Rust and RLTK - The Roguelike Tool Kit we'll be using to provide input/output. Even if you don't want to use Rust, my hope is that you can benefit from the structure, ideas and general game development advice.

Rust first appeared in 2010, but has only relatively recently hit "stable" status - that is, code you write is pretty unlikely to stop working when the language changes now. Development is very much ongoing, with whole new sections of the language (such as the asynchronous system) still appearing/stabilizing. This tutorial will stay away from the bleeding edge of development - it should be stable.

Rust was designed to be a "better systems language" - that is, low-level like C++, but with far fewer opportunities to shoot yourself in the foot, a focus on avoiding the many "gotchas" that make C++ development difficult, and a massive focus on memory and thread safety: it's designed to be really difficult to write a program that corrupts its memory, or suffers from race conditions (it's not impossible, but you have to try!). It is rapidly gaining traction, with everyone from Mozilla to Microsoft showing interest - and an ever expanding number of tools being written in it.

Rust is also designed to have a better ecosystem than C++. Cargo provides a complete package manager (so do vcpkg, conan, etc. in C++ land, but cargo is well-integrated), a complete build system (similar to cmake, make, meson, etc. - but standardized). It doesn't run on as many platforms as C or C++, but the list is ever-growing.

I tried Rust (after urging from friends), and found that while it doesn't replace C++ in my daily toolbox - there are times that it really helped get a project out of the door. It's syntax takes a bit of getting used to, but it really does drop in nicely to existing infrastructure.

If you've used other programming languages, then there's a lot of help available!

If you find that you need something that isn't in there, it's quite likely that someone has written a crate ("package" in every other language, but cargo deals with crates...) to help. Once you have a working environment, you can type cargo search <my term> to look for crates that help. You can also head to crates.io to see a full list of crates that are on offer in Cargo - complete with documentation and examples.

If you are completely new to programming, then a piece of bad news: Rust is a relatively young language, so there isn't a lot of "learn programming from scratch with Rust" material out there - yet. You may find it easier to start with a higher-level language, and then move "down" (closer to the metal, as it were) to Rust. The tutorials/guides linked above should get you started if you decide to take the plunge, however.

On most platforms, rustup is enough to get you a working Rust toolchain. On Windows, it's an easy download - and you get a working Rust environment when it is done. On Unix-derived systems (such as Linux, and OS X) it provides some command-line instructions to install the environment.

Getting comfortable with a development environment

You want to make a directory/folder for your development work (I personally use users/herbert/dev/rust - but that's a personal choice. It really can be anywhere you like!). You'll also want a text editor. I'm a fan of Visual Studio Code, but you can use whatever you are comfortable with. If you do use Visual Studio Code, I recommend the following extensions:

Once you've picked your environment, open up an editor and navigate to your new folder (in VS Code, File -> Open Folder and choose the folder).

Now that you are in your chosen folder, you want to open a terminal/console window there. In VS Code, this is Terminal -> New Terminal. Otherwise, open a command line as normal and cd to your folder.

Rust has a built-in package manager called cargo. Cargo can make project templates for you! So to create your new project, type cargo init hellorust. After a moment, a new folder has appeared in your project - titled hellorust. It will contain the following files and directories:

If you've used other programming languages, this should look somewhat familiar - but the syntax/keywords are probably different. Rust started out as a mashup between ML and C, with the intent to create a flexible "systems" language (meaning: you can write bare-metal code for your CPU without needing a virtual machine like Java or C# do). Along the way, it inherited a lot of syntax from the two languages. I found the syntax looked awful for the first week of using it, and came quite naturally after that. Just like a human language, it takes a while for your brain to key into the syntax and layout.

So what does this all mean?

Go ahead and type cargo run. After some compilation, if everything is working you will be greeted with "Hello World" on your terminal.

Cargo is quite the tool! You can learn a bit about it from the Learn Rust book, and everything about it from The Cargo Book if you are interested.

You'll be interacting with cargo a lot while you work in Rust. If you initialize your program with cargo init, your program is a cargo crate. Compilation, testing, running, updating - Cargo can help you with all of it. It even sets up git for you by default.

You may find the following cargo features handy:

Cargo also supports extensions - that is, plugins that make it do even more. There are some that you may find particularly useful:

Lets modify the newly created "hello world" project to make use of RLTK - the Roguelike Toolkit.

Go ahead and make sure that your name is correct! Next, we're going to ask Cargo to use RLTK - the Roguelike toolkit library. Rust makes this very easy. Adjust the dependencies section to look like this:

We're telling it that the package is named rltk, and is available in Cargo - so we just have to give it a version. You can do cargo search rltk to see the latest version at any time, or go to the crate webpage.

It's a good idea to occasionally run cargo update - this will update the libraries used by your program.

Go ahead and replace the contents of src\main.rs with:

Save, and go back to the terminal. Type cargo run, and you will be greeted with a console window showing Hello Rust. 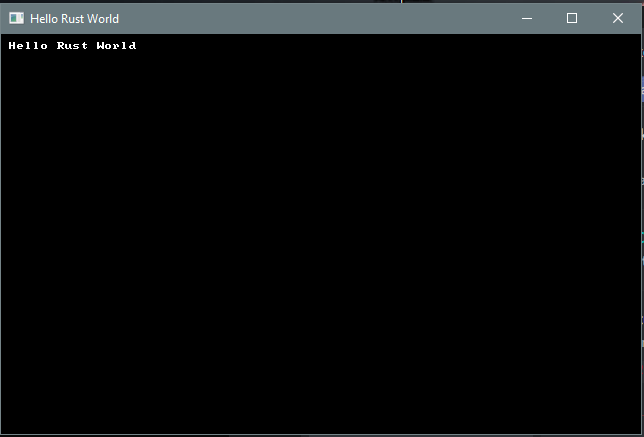 If you're new to Rust, you are probably wondering what exactly the Hello Rust code does, and why it is there - so we'll take a moment to go through it.

Hopefully that made some sense!

Playing with the tutorials

You'd probably like to play with the tutorial code without having to type it all in! The good news is that it is up on GitHub for your perusal. You need to have git installed (RustUp should have helped you with that). Choose where you would like to have the tutorials, and open a terminal:

After a while, this will download the complete tutorial (including the source code for this book!). It is laid out as follows (this isn't complete!):

To run an example, open your terminal and:

If you are using Visual Studio Code, you can instead use File -> Open Folder to open the whole directory that you checked out. Using the inbuilt terminal, you can simply cd to each example and cargo run it.

You can get to the source code for all of the tutorials at https://github.com/thebracket/rustrogueliketutorial.

I update this tutorial a lot - adding chapters, fixing issues, etc. You will periodically want to open the tutorial directory, and type git pull. This tells git (the source control manager) to go to the Github repository and look for what's new. It will then download everything that has changed, and you once again have up-to-date tutorials.

I don't recommend running this from inside Visual Studio Code or another IDE, but if you'd like to ensure that you have the most recent release of Rust (and associated tools), you can type rustup self update. This updates the Rust update tools (I know that sounds rather recursive). You can then type rustup update and install the latest versions of all of the tools.

There's a number of ways to get help: